Fueling your mind with sugar right before a match is effective. -Nikotama to Hidaka

Felicia is a small girl with a orange hair. She uses a butterfly ribbon in her hair and dresses in a Gothic like black dress. She's often seen with a black umbrella in her hands.

11 years later she has seem to outgrow her Gothic phase and has worn she more clothes suiting her age, she now has two twin tails with two butterfly ribbons

Nikotama is a outgoing girl with her acquaintances but with other persons she tends to be reserved. She was not seen in action however her showed had a great knowledge about various games and tactics. Felicia is a great observer too, demonstrating this in a lot of moments, principally in the confrontation between Haruo and Hidaka.

By the time Dash happens she seems to have retire from gaming and has become more laid-back now that she is a mother, but still keeps her knowledge about various games and tactics and love for them has she is one of the few with people in the area with arcade cabinets in her place. 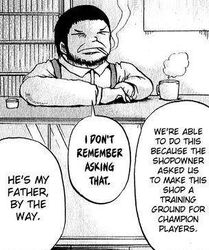 Before the events of the show, she was just a normal girl that was amazing at video games but it wasn't until her dad shop reseveied acarde cabits at her dads place, she deside to spread the word of a night acarde she would be hosting and soon she had a following of people the repect her for her gaming skills and quickly become there learder. using her dad shop as there base. Much to his dispeasure.

Nikotama first meets with Koharu in a match of darkstalkers where Hidaka was completely destroyed by Felicia. After said match she walks up to Hidaka and takes a liking towards her due to her style while using Hutzil. She also notices that she comes in everyday yet only practice alone and is held back by her compassion due to her not using the Confusioner as a win condition at the start, showing that Hidaka wanted to give her opponents a chance. She hands her a card saying that if she wants to become stronger that she should come to this location. Like everyone else She accepts Koharu in her gaming group for intensive training and even coaches her due to her seeing great potential in Koharu.

During this time, the two start getting close and Hidaka even opens up to her and revealing about her love for Haruo, Knowing this she pushes her even more to help her new friend to achieve her goal.

She is later with Hidka when she receives the letter of challenge left by Haruo arcade center bulletin board and notes his old spacing in his spelling. She later is also present on the day of the challenge, Haruo and Koharu face off against each other.

Throughout there battles Nikotama senses that something is amiss until realizes that Koharu lacks something that Haruo has, he plays for fun.

Before the last match can start Nikotama gives her own moral support to Koharu saying that even that the stakes are high that she should try not to panic and have fun and even hidaka loses in the end she confronts her saying that she should use that love and rage to become stronger in order to win his heart. 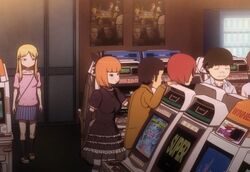 Felicia reappears in Round 17 were he arrives with Koharu and breaks up the confrontation between the bad blood of  Mizonokuchi Force and Haruo were she witness him trying to challenge Koharu to a game of Virtua Fighter 2, but she declines in favor and then provoke’s the rest of the Mizonokuchi Force to bully Haruo and she half-heartedly agrees with it.

Koharu who is criticized by Felicia noticing that she has developed some sadistic notions as of late, which disconcerts her. Later she is the one to inform  Koharu of a turf war and conforms to Hidaka that Haruo is part of Team Shibuya.

Later that late, on round 18, the two team stare each other down deciding on fighting with “Fighting Viper,” Before they start Nikotama tries to clam Hidaka down after Mayumayu taunted her and sees that her angrier is fueling her skill and is still worried on what happened earlier, this was her last appernce in the anime only being referenced from time to time

Her last appearance in the Manga, after the Haruo and Hidaka had left, she stayed to have the second round with the Shibuya Squad for there bowling match and her team had lost and wanted a rematch. After a bit of back and forth the competition never got settled and came to a peace agreement. 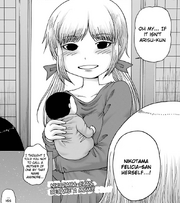 After the fateful day of Haruo and Ono, she and Hidaka pressumdly still hung out with eachother, as the two seemed very close, but as the two grew it seemed that the two start seeing less and less with eachother. Altough one fateful day Niko met a man, the two eventully fell in love and even had a child, right now it's unknown if there still togather, and not waiting to let it old goal die 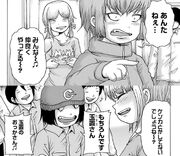 she herself opened a Night Acrade were many people came to train there skills and one day even got Hidaka student, Yami, under the recommendation Arisu-San were inside they explain her past in gaming and ow she like a goddness of the place.

After this she later reappers when Hidaka is agruing with Arisu, flustering her by calling her Koharu and meotioning how good she was when she was in highschool, she then talks over with Hidaka on the wierd bond between Yami and Arisu and understands her concern and desides that her nigh acarde coouldbe a safe space from the street dangers and letting Hidaka rest well that Yami will be okay.

Felicia is good friends with Koharu ever since they met. She saw something more in her and wanted her to grow in her gaming. She was always supportive of her love for Haruo and pushed her harder. Even as adults the two seem ver close and still get along well, with Niko loving to tease Hidaka.

Her name Futako (フタコ) means means "two." or "a word that comes after a woman's name, child." The Tamagawa (玉川) in her name means "many, frequent, much." Ironlly while the Futako does have a meaning, it doesn't mean i the right one. There is no precise definition. It is colloquially referred to as "Futako" (フタコ) or "Nikotama" (ニコタマ) (her nickname), depending on how you read the first three kanji characters in the name and lastly the word Felicia in her name is a name is the same name from a character of Darkstalkers: The Night Warriors.

Community content is available under CC-BY-SA unless otherwise noted.
Advertisement